This week, CheckMate tackles a One Nation senator's false claim that Australia remains at risk of having its health measures dictated by foreign entities.

We also investigate whether last month's election saw the Liberal Party achieve its lowest-ever female vote, and set the record straight on a doctored news report.

One Nation senator Malcolm Roberts has continued to push the baseless claim that Australia was — and may still be — at risk of being forced to adopt restrictive health measures by the World Health Organization (WHO).

"The WHO has quietly pulled the amendments to International Health Regulations that would have decimated sovereignty," reads one recent tweet.

"They will be back to try it another way, we will continue to monitor and defend against foreign incursions to our way of life."

The tweet also linked to an article in which Senator Roberts claimed the changes could have seen lockdowns and compulsory vaccination "forced on all Australians".

So, what is he talking about?

The US recently proposed a number of amendments to the International Health Regulations (2005), which provide the legal framework covering states' rights and obligations for handling public health events with the potential for international spread.

These existing rules require signatories to maintain their capacity to detect and respond to emerging threats, and to report them to the WHO.

They also set the criteria for declaring a "public health emergency of international concern", during which the WHO can develop and recommend health measures.

The US amendments were on the agenda of last month's meeting of the World Health Assembly, the WHO's decision-making body, and they triggered a wave of misinformation about the organisation's ability to meddle in the affairs of states.

That's because, as AAP Fact Check and FactCheck.org have explained, the WHO can merely make recommendations and has no powers to enforce these or the rules — and the proposed amendments would not change that.

In an email to fact checkers at Associated Press, one expert labelled suggestions to the contrary as "utterly untrue", noting the changes "would ask countries to promptly and truthfully report infectious disease outbreaks" and allow the WHO to "offer assistance".

Meanwhile, a US-government spokesperson told FactCheck.org the changes "would strengthen WHO's ability to use publicly available information" to assess potential threats, "inform all nations of the threat in a timely manner, and provide recommendations, not mandates, on how to safely and effectively respond".

Why is no-one talking about herd immunity any more?

Early in the pandemic, the term "herd immunity" hit the headlines. Now, no-one talks about it anymore. Hassan Vally explains why. Sara Davies, a professor of international relations at Griffith University, told CheckMate the amendments "never addressed lockdowns or vaccine mandates" and that, since national legislation was required to comply with the regulations, "there was no risk to sovereignty".

Similar claims concerning sovereignty have circulated — and been debunked — regarding a separate process by the WHO to develop a pandemic treaty by 2024.

As for whether the US proposal was "quietly pulled", there's little evidence to support this, with delegates at the recent summit agreeing that a dedicated working group would now "work exclusively" on updating the health regulations before presenting "a package of targeted amendments" to the assembly in 2024.

Professor Davies said the assembly had "adopted a resolution that set up a process and timeline" for changing the rules, and that the amendments put forward by the US would be considered alongside those of other states, which must be submitted by September 2022.

And while the May summit considered and adopted just one of the US amendments, it was a significant one: halving the time for future changes to take effect, from 24 to 12 months.

Reuters has previously reported that this amendment was "seen as a first step in a broader IHR reform process", while Professor Davies said the change "gets the ball rolling when the additional amendments are discussed by the working group", and could arguably be seen as a strategic move by the US.

Getting liberal with the facts on female voting

As the dust settles on the federal election, Twitter users have suggested that a historically low number of women voted for former prime minister Scott Morrison and the Liberal Party.

"Morrison won the lowest percentage of female votes in the history of the Liberal Party," one user suggested, pointing to a blog post in which former Labor politician Barry Jones made an identical claim.

But is that right?

Of course, only voters in Mr Morrison's electorate of Cook had the opportunity to vote for him directly. However, the blog post and subsequent tweets refer more broadly to the number of first preference votes cast by women for Liberal Party lower house candidates.

Due to the nature of anonymous voting in Australia, we can't know for sure how women voted in 2022 or in any other election.

Experts, however, pointed to low overall vote tallies for the Coalition — of which the Liberal party is just one partner — in 2022 as an indication that support may have fallen to historical lows among all voters, including women.

"If the Coalition had a record-low vote, then there is a high likelihood it would be a record-low female vote," he told CheckMate.

Indeed, an analysis of election data dating back to the inception of the Liberal Party in 1944 shows that the share of first preference votes for either Coalition partner was lower in 2022 than in any election since 1946.

Who are the Coalition's female deputies?

In the wake of the election, voices within Liberal and National ranks cried out for the parties to reconnect with women. Here are two women tasked with leading that charge. The experts suggested the Australian Election Study, conducted by the Australian National University since 1987, could be used to assess patterns of voting behaviour by gender, though the 2022 study was yet to be published.

That said, the study completed after Mr Morrison's 2019 election win found that while 45 per cent of men gave their first preference vote to the Liberal Party, just 35 per cent of women did likewise.

"These results show a widening gender gap with men becoming much more likely than women to vote for the Liberal Party," the 2019 study concluded.

"The relationship has reversed over time; back in the 1990s, women were slightly more likely to vote Liberal than men."

Pre-election polls also provide data on party support by gender, but as the chief investigator of the Australian Election Study Sarah Cameron explained, these may not reflect people's actual votes.

Dr Cameron, who is a political sciences lecturer at the University of Sydney, told CheckMate: "Asking people about their voting intentions before the election won't catch everything because many people are still making up their mind."

CoronaCheck: No, a Canadian news outlet did not say the Pfizer jab had 'a 12 per cent efficacy rate'

Claims that a Canadian news outlet published a headline suggesting Pfizer's COVID-19 vaccine had "a 12 per cent efficacy rate" have been debunked by various fact checkers.

Screenshots circulating widely on Facebook and Twitter appear to attribute the headline to Global News, but fact checkers at Reuters found the image was digitally altered.

A spokesperson for Global News told Reuters the network could "confirm that the headline and caption in question were never published on our site", while an advanced Google search by the fact checkers did not reveal any such claim being published by any media outlet.

As for the source of the 12 per cent efficacy figure, CheckYourFact reported that the claim appeared to have originated from a post to the website Substack by "investigative reporter" Sonia Elijah on April 3, 2022, which discusses a US Food and Drug Administration briefing document on Pfizer's vaccine dated December 2020.

According to Gideon Meyerowitz-Katz, an epidemiologist at the University of Wollongong, that post miscalculated the efficacy rate of the vaccine by using a figure of "suspected but unconfirmed" cases rather than "confirmed" cases.

Additionally, fact checkers at AFP pointed out that the Substack author writes for Trial Site News, a website that has promoted unproven COVID-19 treatments.

Meanwhile, a claim that Pfizer CEO Albert Bourla had said the company's "dream" was to "reduce the number of people in the world by 50 per cent" by 2023 was found by fact checkers at Politifact to be based on doctored media.

The quote was derived from a filmed conversation between Bourla and World Economic Forum chief executive Klaus Schwab at the forum's annual meeting in Davos, but fact checkers found that key words were edited out of their conversation before it was posted on BitChute.

In fact, Dr Bourla said he wished to "reduce the number of people in the world that cannot afford our medicines by 50 per cent".

As the Labor Party emerged victorious from the election, the new government quickly turned its attention to the state of the economy.

Six days after being sworn in as the Minister for Finance, Katy Gallagher told ABC TV's Insiders: "We have inherited the worst set of budget books."

But RMIT ABC Fact Check this week found that claim to be wrong. 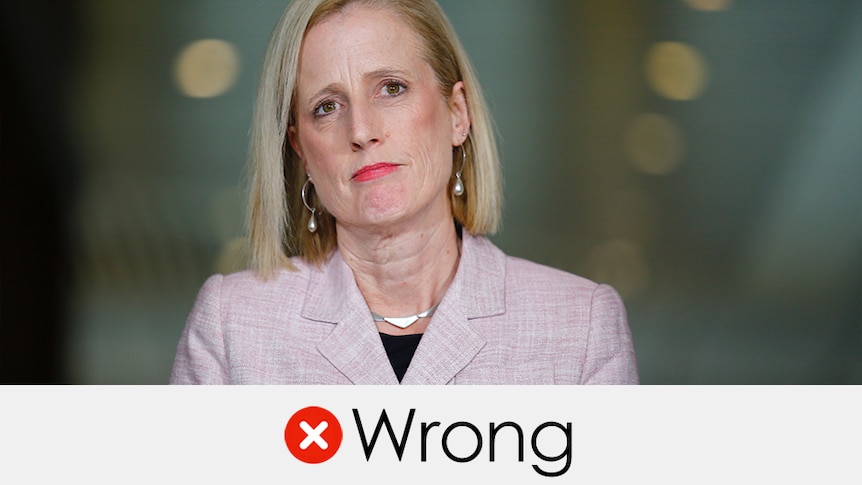 The only fair way to make historical comparisons is to take into account the size of the economy and measure key indicators as a proportion of GDP.

On this basis, gross debt levels were historically much higher for previous incoming administrations than the figure faced by the Albanese Government.

Similarly, the deficit as a percentage of GDP is not the worst on record.

Ms Gallagher's claim is familiar territory for Fact Check, which has debunked near identical claims made by both sides of politics over the years.

In 2015, then-Liberal Party deputy leader Julie Bishop was also found to be wrong when she claimed the Coalition had been left with the "worst set of financial accounts inherited by any incoming government in Australia's history".

Edited by Ellen McCutchan and David Campbell, with thanks to Ewa Staszewska and Liam McNally