Beekeepers on the NSW Mid North Coast are the latest to prepare to destroy their hives after the detection of varroa mite in hives at a blueberry farm.

The deadly bee parasite has been detected in Nana Glen, 25 kilometres inland from Coffs Harbour, where a 10-km eradication zone has been established.

It was the 43rd detection since an initial case in the Port of Newcastle last month.

Mr Elks' family has been keeping bees in the area for several generations, and their hives are just a few kilometres from the detection site, putting them within the eradication zone.

Mr Elks said he had to find out about the detection on his doorstep from a fellow beekeeper.

"A bee farmer rang us on the bee telegraph and said, 'Mate, you're in the red zone of varroa,'" he said.

"We've heard nothing from the DPI, nothing whatsoever."

The DPI has been contacted for comments.

NSW Agriculture minister Dugald Saunders said the hives had been moved earlier this year, prior to the introduction of the statewide pause on bee movement.

"The good news is that we can still draw a direct line between every single case so far, which means we have a good handle on the situation," Mr Saunders said.

Mr Elks says he did not have confidence the outbreak could be contained and was emotional at the prospect of losing his bees.

"You lose your bees i'ts like losing half your family. No money will ever make up for the bees," he said.

NSW Apiarists Association president Steve Fuller said the outbreak was the "last thing" the industry needed, amid hopes the infestation was being contained.

He estimated about 15 beekeepers in the area would be affected.

"These bees have been traced back to a beekeeper in Newcastle who said he's brought them out in approximately April this year," Mr Fuller said.

"So we know it's a direct tracing to Newcastle."

Mr Fuller said contact tracing only worked if beekeepers were being honest.

"If everyone was up-front and honest to DPI at the start and told them where their bees and where they've moved things, we would have known about this weeks ago," he said.

Concerns about impact on agriculture

Mr Fuller has 1,200 hives in the emergency zones and expects that the 200 located in the red zone will be destroyed in the coming days.

"It's the worst-case scenario," he said.

"It's the most central place that you could actually do it for the Coffs Coast.

"It's taking in almost 80 to 90 per cent of the berry growing industry of this area, so it's locked us all down. Everything's at a standstill now."

Mr Saunders said contact tracing and surveillance would be carried out in the Coffs Harbour region to minimise further risk.

The impact on the local agriculture industry is now the next concern, with approximately 5,000 hives needed to pollinate blueberries, raspberries, blackberries, avocadoes and macadamias in the region until the end of September.

Varroa mite pesticide on the way

The world-first hormone based pesticide would kill varroa mite and small hive beetle but be safe for honey and native bees. 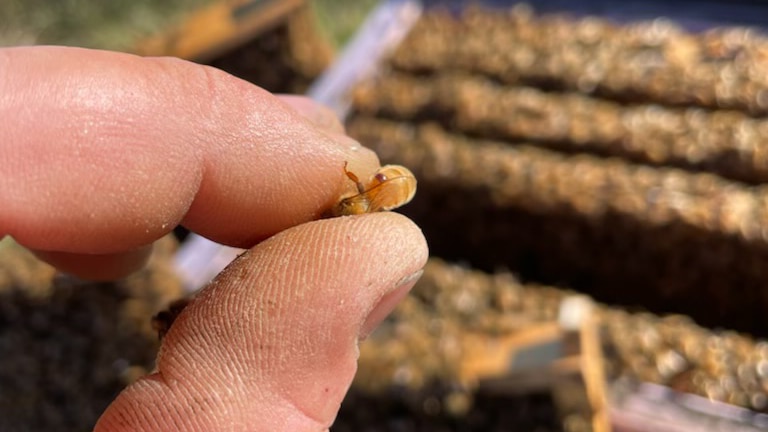 She said it was deeply disappointing and devastating for growers within the 10km zone.

"It … has implications for the broader industry," Ms Mackenzie said.

"We will try and push for the best … balanced outcome which balances the biosecurity issue that we have on our hands and the need for our growers to access pollination services," she said.

The Department of Primary Industries is tasked to work with the industry to find the best solutions.